The Bayelsa State chapter of All Progressives Congress (APC) has criticised the State House of Assembly for approving N2.9 billion loan to Governor Douye Diri to purchase cars.

The Publicity Secretary, Doifie Buokoribo, made the party’s position known in a chat with News Agency of Nigeria (NAN) in Yenagoa on Thursday.

Abranhama Ingobere, the Speaker, had explained that the loan from commercial banks had a three-year tenure

Ingobere said it would be deployed to purchase operational vehicles for the governor, his deputy and top officials of Bayelsa government.

Buokoribo, however, described the request and approval as insensitive. He pointed out that the government was yet to meet outstanding obligations to civil servants and pensioners.

“The decision of Sen. Diri to take a bank loan of N2.9 billion for the purpose of buying “operational vehicles for the governor, his deputy and other top government functionaries is regrettable

“Coming less than three weeks as governor, this move is unsympathetic. Sadly, the Bayelsa State House of Assembly has approved the loan request.

“Diri is taking the loan at a time when civil servants and pensioners in the state have not been paid.

“This is a continuation of the frivolities of the PDP government of Dickson; a major reason the people of the state roundly rejected them at the poll. 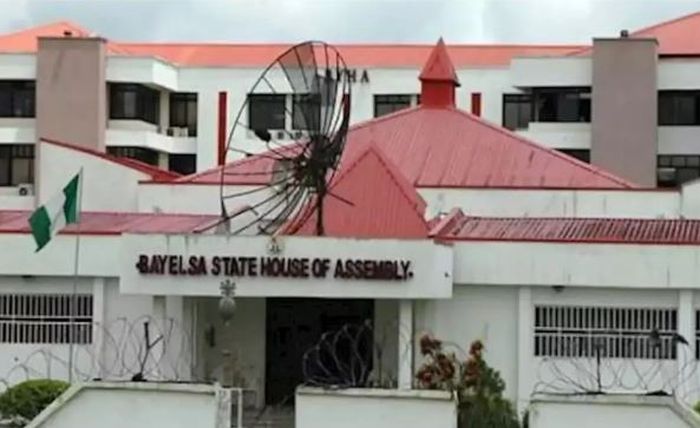 The spokesman noted that while Douye Diri is the governor of Bayelsa State, “in the hearts and minds of our people, he is illegitimate. He was not the one they voted for.”

“He will bear the burden of illegitimacy throughout his tenancy at Creek Haven, Government House, Yenagoa,”

In February 2017, the Assembly approved a loan request of N3billion by former governor, Seriake Dickson.

The money was for the purchase of cars for Dickson himself and the 24 lawmakers.

My Love, I Am Spending The Night At The Office With My Secretary Because My Car Is Faulty – Reply As A Nigerian Wife

Photo Of Regina Daniels With Her Co-Wife, Laila And Their Kids