The Special Assistant to the Lagos State Governor on Health, Dr Tunde Ajayi, has disclosed that six of the patients at the Infectious Disease Hospital have recovered.

Ajayi via his twitter handle, @thetundeajai, said the patients would be discharged soon.

“Six of our #COVID19 inpatients have recovered and will be discharged soon.

There is something Lagos is doing right. Lagos takes the lead,” he wrote.

According to the Nigeria Centre for Disease Control, 51 cases were confirmed in the country as of 11:25 pm on March 25.

Also, the Lagos State Commissioner for Health, Prof. Akin Abayomi, at a briefing on Wednesday said the state was tracing over 2,000 contacts. 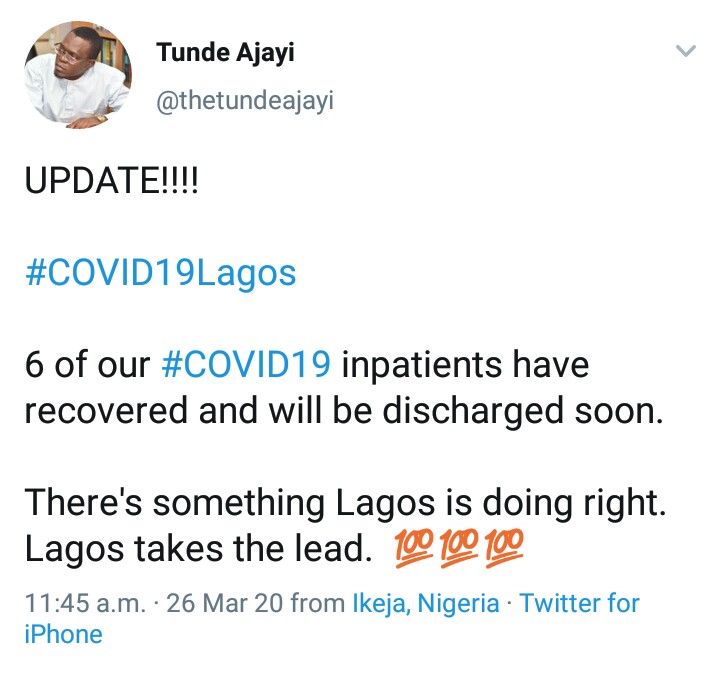 TEARY!!! Crippled Man Couldn’t Hold His Happiness Back As A Man Gifts Him A Wheelchair (Watch Video)

IGNORANCE!!! Alleged Coronavirus Patient In Self Isolation In Kano Dies

We Shall Be Victorious In Fight Against Coronavirus – Dangote Assures Africans