Jean Paul Mira, the French doctor who alongside his colleague Camille Locht asked for a new Coronavirus drug to be tested in Africa, has apologized after their statement triggered a worldwide outrage.

LIB reported earlier that Jean Paul Mira and Camille Locht who spoke on a live TV interview, insisted that Africa is the best place to conduct such test as they recalled how an experimental treatment for AIDS was carried out in Africa.

The dcotors were discussing about a “repurposed” tuberculosis vaccine as a COVID-19 beater during an expert chat on television, when the suggestion was made. The drug is currently being trialled in several European countries and Australia. 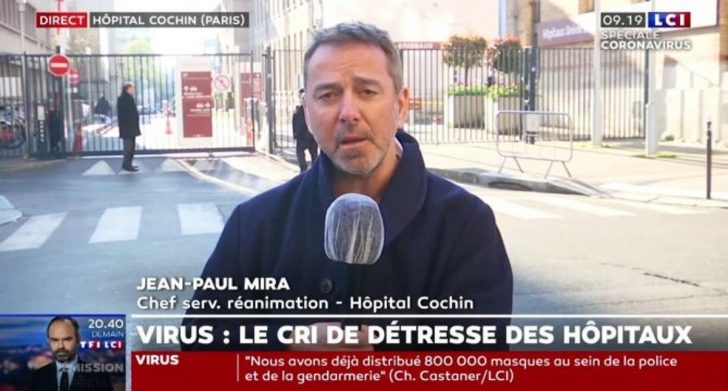 Mira, who is the intensive care unit (ICU) head at the Cochin hospital in Paris has now apologized over his comment which incited an outcry.

MUST READ:  No Man Born Of Woman Can Bring Me Down – Oshiomhole Boasts Amidst APC Crisis (Watch Video)

In a statement released on Friday April 3, Mira’s employer, the Paris network of hospitals quoted him saying:-

“I want to present all my apologies to those who were hurt, shocked and felt insulted by the remarks that I clumsily expressed on LCI this week.”

25 thoughts on “UPDATE! French Doctor Apologizes After Asking For New Coronavirus Drug To Be Tested In Africa”

TOO BAD!!! Aggrieved Side Chick Logs Into Her Married Lover’s Facebook Account, Posts His Family Picture With ‘RIP’

“How Tacha Saved Me From Committing Suicide” – Twitter User

BUSTED!! Serial Rapist Who Allegedly Lures Women Into Hotels And Makes A Video Of Their Sexual Act Apprehended In Delta

BLACK LIVES DOESN’T MATTER?? White Man Was So Intent Of Painting Over BlackLivesMatter Mural In Front Of Trump Tower