Drama ensued at a police checkpoint after a man believed to be a thief snatched a bag containing all the bribes the officers had collected and vanished into the bushes.

According to Tuko.co.ke, the bizarre incident happened near Kathegeri shopping centre on the Nairobi-Meru highway.

The daredevil man reportedly emerged from the bushes, grabbed the officers’ heap of cash before disappearing up a steep slope adjacent to the road.

Nairobi News reported an eye witness as saying there were two officers of the opposite gender on the spot when the “robbery” happened in broad daylight.

“There are these steep roads that connect to the road, and the spot where the officers were based is shaped like a wedge. That is the road the young man used to escape.

“On realising he could not catch the young man, the officer shouted at him many times. But there is little he could do as the man vanished into the bushes,” 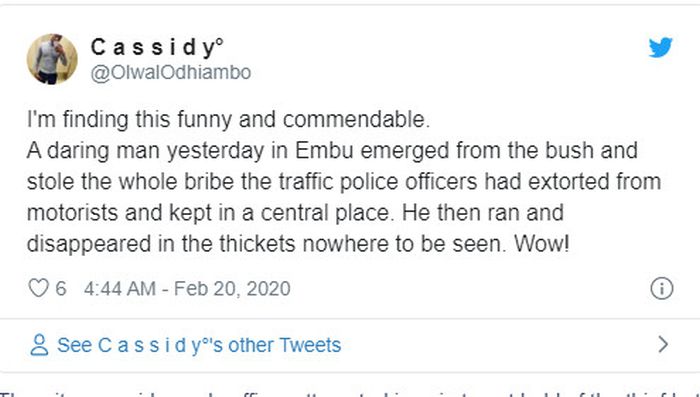 The witness said a male officer attempted in vain to get hold of the thief but it seems he had mustered the area’s terrain well.

The officers were only armed with batons and were left with nothing to do other than hurling curses, Tuko.co.ke reports.

Before the loss of their bribe cash, the officers had reportedly stopped at least four vehicles for inspection.

It took the daredevil thief just about “five-seconds” to execute his craft to the delight of onlookers who detest the notoriety of police officers in taking bribes and hiding them in the bush to avoid facing the Ethics and Anti-Corruption Commission.

The officers were gathering the cash at a central point for sharing at the end of the day’s operation when the thief outsmarted them.

MUST READ:  SCAM ALERT!! See The New Way Scammers Are Trying To Control Your Device (VIDEO)

16 thoughts on “THIS IS SERIOUS!!! Police Officers Curses Thief Who Snatched A Bag Full Of Their Hard Earned “Bribe” Money (See Full Gist)”

We Have Only 30 Policemen In 100 Villages – Katsina State Governor, Masari Cries Out

JUST IN!!! CAN Tells Buhari Government What To Do About Kaduna Killings