Now, I see reason why some Nigerians don’t want Burna Boy to Win the Grammy and God listened to their cry.

A popular PR lady even said Burna winning the Grammy Award will ruin him as the ego of him becoming the first Nigerian will get into his head and eventually start misbehaving.

MUST READ:  SENT OFF! Everton Manager Ancelotti Reveals Why He Got Red Card In 1 – 1 Draw With Man United

Just few weeks after Grammy loss, Burna Boy took to Twitter to declare that since the Afro-Beat pioneer, Fela passed on, he remains the GREATEST Afro-beat acts in Nigeria.

Even without winning, Burna Boy is still boastful and proud such that he declared himself the BEST after Fela and indirectly rubbished all what the likes of Wizkid, Davido has done to keep the Afrobeat flying.

Burna actually said, Wizkid and Davido begged a lot for the international recognition they are getting and he is the only one that got it out of merit.

Here’s what someone have to say about Burna boy 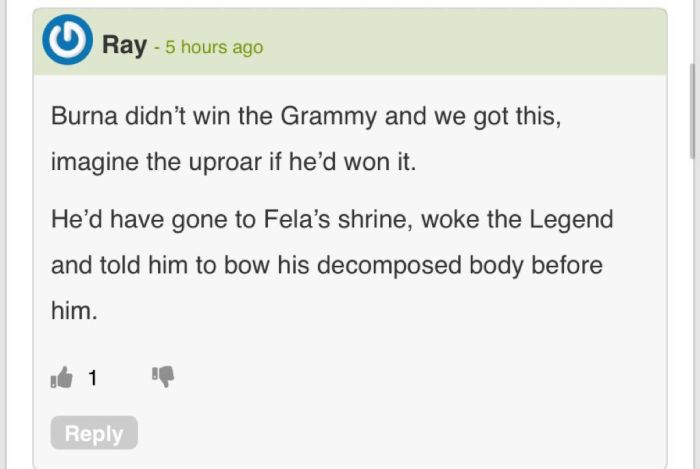 You can see the ego in him?

Do You Agree Burna Boy’s Pride Will Be Tripple If Had Won Grammy?

The post Thank God Burna Boy Did Not Win The Grammy – Here’s What He Would Have Done appeared first on Naijaloaded | Nigeria's Most Visited Music & Entertainment Website.

Do You Agree? “Women Should Not To Be Controlled” – Actor Yul Edochie