Victims of the painful Lagos gas explosions are now being named. The inferno was reportedly caused by activities of pipeline vandals which led to an explosion in the area.

According to reports, the fire started around 8am on Sunday.

Residential and commercial houses were affected as the fire engulfed the neighborhood – with many people scampering to safety.

MUST READ:  If A Man Wants To Take A Lady On A Date, He Should Buy Her Outfit Too – UK Model, Eva Apio Reveals

The principal of Bethlehem girls college reportedly died while trying to rescue her student. Another set of victims have been identified. Among them include this beautiful couple; Chisom and her husband.

” The number of people who died in the Explosion this morning will look like statistics until you have a friend or family member in the number , I’m so pained tonight !!! Nigeria would test your strength , RIP Chisom and RIP to your husband too “ 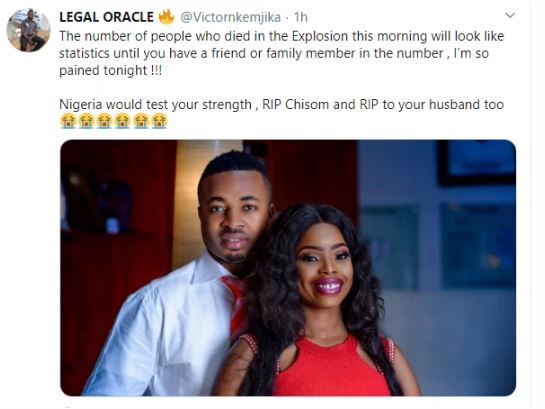 May Their Soul Rest In Perfect Peace!

29 thoughts on “SO SAD!! This Beautiful Couple Died In The Festac Gas Explosion Yesterday (Photo)”

“God, Why Have You Abandoned Us?” – Lagos Fire Explosion Victims Cries Out (Video)