Nigerian singer, Dotman Akube has revealed the reason he has numerous haters in the music industry.

The singer, on his Twitter page, revealed that he loves Wizkid and that has generated a lot of hatred for him in the industry.

MUST READ:  Leader Of Anti-Lockdown Protest Tests Positive For COVID-19

Recall that in December 2019, Akube declared Wizkid to be the greatest, an act which saw him at loggerhead with DMW crew.

Now in a new development, the singer has said Wizkid is second only to music legend, King Sunny Ade in the music industry. 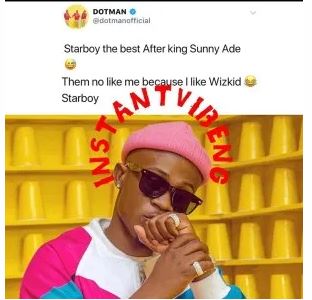 The post Singer, Dotman Reveals Why He Has Many Haters In Music Industry (His Reason Will Shock You) appeared first on Naijaloaded | Nigeria's Most Visited Music & Entertainment Website.