The boy who went viral for flogging his girlfriend mercilessly with his belt, whe he was called “Junior” in the video has been identified as Moses, an upcoming musician who calls himself King Marett The Entertainer on Facebook.

In the video, the boy is seen flogging his girlfriend with belt in the presence of his friends. The friends were seen laughing and making no effort to stop him as they record the heartbreaking moment.

It was alleged that he beat her up after she told him she’s pregnant and he’s responsible for it.

In a Chat released, Moses said he flogged his girlfriend for lying against him.

“De gal lied abt carrying a bby 4 me… She end up telling me she aborted de bby .. She insult me 4 asking her… like I was very angry,” the chat from a person with a profile photo of Moses (King Marett) reads.

See The Chat Below: 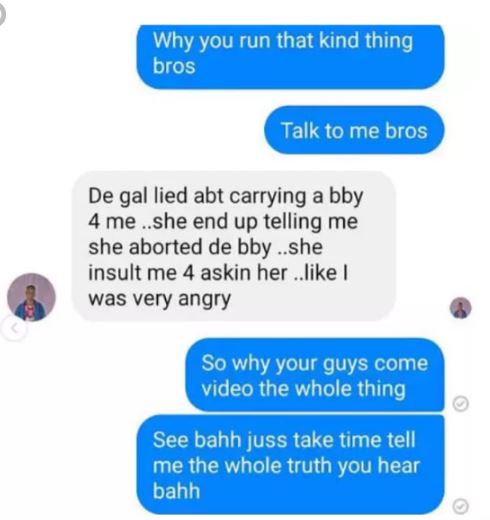 The post She Lied Against Me – Boy Who Flogged His Girlfriend Mercilessly Opens Up On What Happened appeared first on Naijaloaded | Nigeria's Most Visited Music & Entertainment Website.

American Rapper, Meek Mill Tweets That He’s Looking For A New Young Nigerian Artiste – Who Should We Give Him?

Wow! 2021 Is about to be great for a lucky young Nigerian artiste, as American Rapper, Meek Mill begins a talent hunt in Naija. The...