The Premier league football season could restart in July amidst the coronavirus pandemic and last 4- 5 weeks according to a new report.

According to a report by Football London, the Premier League, EFL, the FA and the government had a conference call on Saturday and they all discussed the possibility of starting leagues in July and the clubs will try and wrap up all the games within “four to six weeks” with no fans in attendance.

MUST READ:  Single Mother Of 4 Who Hawks Purewater, Bursts Into Tears As She Receives New Apartment, Over N500,000 Cash (Watch Video)

According to the report, the leagues are determined to complete their football league seasons – with most clubs having nine or ten matches of their league campaigns remaining – and failure to complete their seasons might affect their next season preparations and could lead to a loss of £750million in TV revenue for clubs. 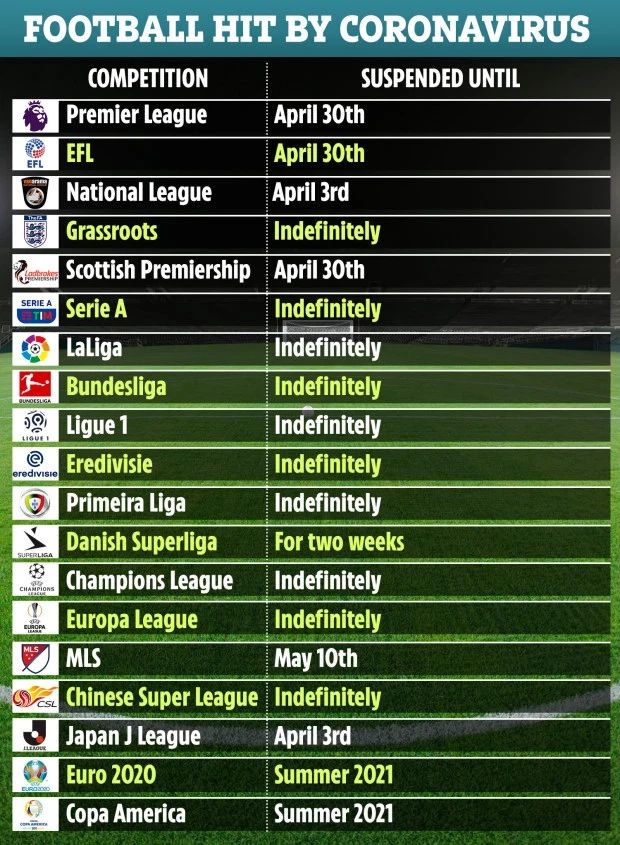 But the FA has not come out to publicly endorse or deny the report, with a statement by them saying;

“The Premier League, EFL and PFA met today and discussed the growing seriousness of the Covid-19 pandemic.

“It was stressed that the thoughts of all three organisations continue to be with everyone affected by the virus.

“The Premier League, EFL and PFA agreed that difficult decisions will have to be taken in order to mitigate the economic impact of the current suspension of professional football in England and agreed to work together to arrive at shared solutions.

“The leagues will not recommence until 30 April at the earliest. They will only do so when it is safe and conditions allow.

“Further meetings will take place next week with a view to formulating a joint plan to deal with the difficult circumstances facing the leagues, their clubs, players, staff and fans.”

The post Premier League Football May Restart Soon, But There Are Conditions To It (Read Details) appeared first on Naijaloaded | Nigeria's Most Visited Music & Entertainment Website.