Sources report that a wealthy businessman – and husband of six – has died after allegedly being forced into a marathon sex session with his ‘jealous’ wives.

According to sources report, the man known as Uroko Onoja was having sex with the youngest of his spouses when the remaining five are reported to have set upon him with knives and sticks and demanded that he have sex with each of them too.

Mr Onoja went on to have intercourse with four of his wives in succession, but ‘stopped breathing’ as the fifth was making her way to the bed in Ogbadibo.

Two women have been arrested following the incident in the state of Benue last week.

Mr Onoja was understood to have returned from a bar in the small community of Ugbugbu, Ogbadibo, at around 3am on Tuesday, and headed for the bedroom of his youngest wife.

His five other wives who were said to have held a meeting to discuss their intentions before their husband arrived home – are then alleged to have burst into the bedroom armed with knives and sticks to insist that they too be granted their conjugal rights.

The businessman, who has been described as a philanthropist who ‘contributed positively’ to the growth of his local community, is thought to have resisted the demands of his wives’ before being overpowered.

Mr Onoja reportedly stopped breathing and could not be resuscitated after having sex with four of his wives in a row.

His youngest spouse is quoted as saying her five fellow wives ran into the forest when they realised their husband was dead.

MUST READ:  BBNaija 2020: Why Biggie May Issue Vee A Strike On Sunday (Watch Video)

Sources learnt from the head of his village, Okpe Odoh, that the matter had been reported to police. 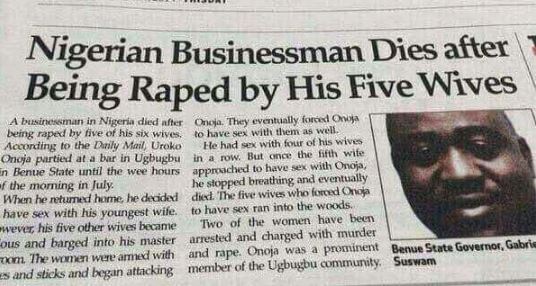 In the ancient City of Ibadan everyone knows the name Sunday Igboho. He is a politician and a grassroots mobiliser. He has a reputation for...

BE HONEST!! Can You Drink From This Bottle? (See Photo)