Italians poured out of their homes in the country’s north this afternoon after an earthquake shook Tuscany amid the nation’s growing coronavirus outbreak.

The 2.6-magnitude quake, which struck around a mile north of Camaiore, was recorded by the Italian Institute of Geophysics and Volcanology at 2.17pm local time.

It had an epicenter in the Lucca province in Tuscany and a depth of around five miles, ANSA reported.

There were initially no reports of damage as a result of the tremor, though people in Camaiore and nearby Viareggio noted feeling ‘vibrations from the ground’.

It was also reported people across Versilia had ‘poured out of their houses’ when the quake struck the area this afternoon.

The earthquake comes as the coronavirus death toll reached 463 in Italy, with more than 9,000 virus cases confirmed across the stricken nation.

Prime minister Giuseppe Conte declared last night that ‘everyone must give up something to protect the health of citizens’.

Anyone with a fever has been ordered to stay indoors with travel banned except in emergencies and public gatherings including weddings, funerals and sports fixtures shut down. 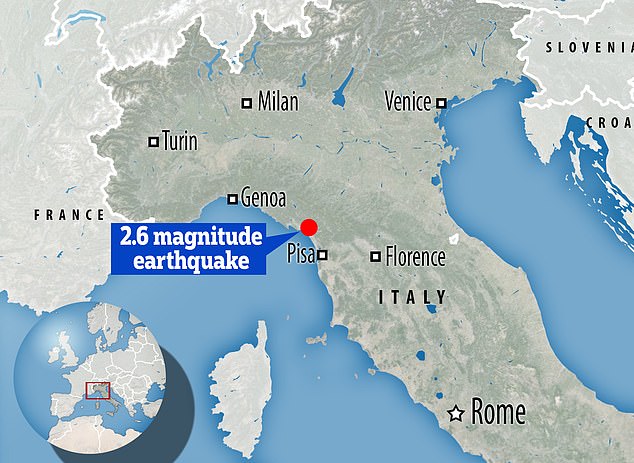 The virus is spreading so quickly that doctors are now having to make life-or-death decisions about who gets access to intensive care.

Italian health officials had warned on Saturday that the northern Lombardy region was starting to run out of hospital beds for its intensive care patients.

The government also began to recall retired doctors as part of an effort to quickly bolster the health service with 20,000 staff.

Ethics rules call on doctors to consider a patient’s age and their chance of survival when allocating hospital beds.

The Italian society of anesthesiology and intensive care has published 15 ethical recommendations to consider for doctors when deciding on admissions.

The criteria include the patient’s age and the likelihood of survival, and not just ‘first come first served.’

‘It’s a reasoning that our colleagues make,’ Dr. Guido Giustetto, head of the association of doctors in northern Piedmont, said yesterday.

‘It becomes dramatic if, rather than doing it under normal situations, they do it because the beds are so scarce that someone might not have access to medical care.’

Italy expanded its quarantine measures to all 60million people in the country last night after a lockdown in the hardest-hit north, including Milan and Venice, had failed to slow the outbreak.

‘Our habits must be changed, changed now. We all have to give up something for the good of Italy,’ prime minister Conte said.

‘When I speak of Italy, I speak of our dear ones, of our grandparents and of our parents,’ he said.

‘We will succeed only if we all collaborate and we adapt right away to these more stringent norms.’

Conte also raged at young people who had continued to gather socially as the virus spread, saying ‘this night life … we can’t allow this any more.’

The nationwide restrictions mean that all schools and universities will remain closed until April 3, with cafes, pubs and eateries ordered to close until dusk.

Italians have been ordered not to move around the country except for work and emergencies, with public gatherings and football matches cancelled.

JUST IN: Photos Of The Two-bedroom Apartment Sanusi Will Now Reside In