On Monday, Pastor Enoch Adeboye of the Redeemed Christian Church of God, RCCG, pointed some qualities his male members should look out for before marrying a lady.Adeboye, who is the General Overseer of RCCG, charged bachelors not to marry a lady who can’t cook.

MUST READ:  Buratai: I Won’t Return To Abuja Until Boko Haram Is Defeated

In a series of tweets, the G.O. as he’s popular called, inferred that a man can’t be eating out all the time, hence the woman should know how to cook.

Adeboye also stated that men should marry women who know how to do home chores.

“My sons, don’t marry a lady who cannot cook. She needs to know how to do chores and cook because you cannot afford to be eating out all the time.”

This particular tweet has been greeted with several reactions, especially from celebrities.

While some are against him, others are in support.

One of those in support is singer Jaywon who took to his Instagram to express his views. 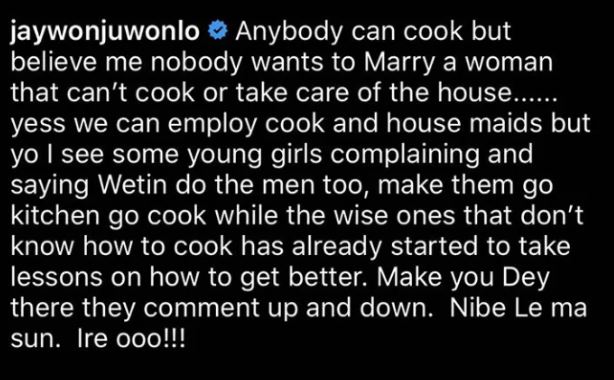 MUST READ:  Frank Lampard Reveals What Chelsea Will Do To Beat Bayern Munich