Controversial ex-Big Brother Nigeria housemate, Tacha has pointed out how relevant she has become since leaving the reality TV show.

Taking to her official Twitter handle, the reality TV star queried who the real social influencers are before going on to state that with no pen or paper she still draws attention.

The popular reality TV star recently caused an uproar on social media after she was spotted at a movie premiere wearing a cleavage-revealing outfit.

Who are the real influencers again.

No pen no paper but i still draw attention. 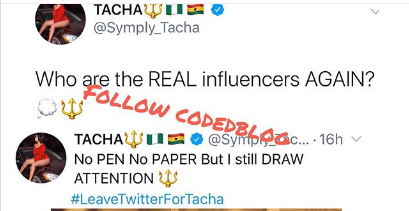 The post No Pen, No Paper But I Still Draw Attention, Tacha Brags appeared first on Naijaloaded | Nigeria's Most Visited Music & Entertainment Website.

One Dies As Gas Explodes Again In Lagos (Photo)

BBNaija: Ozo Chooses Dorathy As His Deputy Head Of House

JUST IN!! Ozo Wins Head Of House Challenge, Picks Dorathy As His Deputy