The Lagos State Government has debunked the rumor that it is imposing a curfew in the state as it battles the Coronavirus pandemic.

Rumours have been rife on social media today that the governor, Babajide Sanwo-Olu, had announced a curfew between 8pm to 6am to begin on Sunday March 29th.

MUST READ:  Ize-Iyamu Tackles Obaseki Over ‘Attacks’ On Ganduje

However, in a disclaimer posted on its social media handles on Saturday March 28, the state government debunked the rumor. 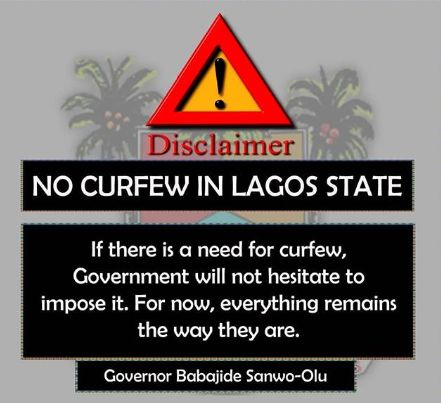 UPDATE! See The Cause Of Akure Explosion (Photos)