Amid lockdown occasioned by the coronavirus pandemic, residents of Aiyetoro community in Ajegunle, Lagos State are living in fear of hoodlums popularly known as Awala Boys.

The thugs who belong to different factional groups have reportedly been terrorising residents and passersby since 2018, dispossessing them of phones, cash and other valuables.

Their operations recently led to the death of three persons – a photographer and secretary of a security committee in Aiyetoro, Peter Edogbei, one Daniel aka Warrior and Moshood aka Alegba – while many others, including a traditional ruler (otherwise known as baale), were injured.

NAIJALOADED learnt that the traditional ruler, Baale of Oke-Ira (also in Ajegunle), Taiwo Olayeni, Edogbeji and other community leaders, were returning from a meeting held at Ajeromi Plaza on Tuesday, March 24, when they ran into the hoodlums on Okoya Bridge, Aiyetoro, around 7pm.

A fight reportedly ensued between two factions of the Awala Boys that day over which group should operate at certain locations in the community.

During the clash, they robbed passersby and attacked them with cutlasses. Edogbeji, 43, died at a hospital the next day from injuries he sustained.

The fight resumed last Sunday when a faction of Awala Boys stormed Tuncarino Street to operate but were resisted. Warrior and Alegba were reportedly killed in the mayhem.

It was gathered that the Awala Boys belong to different groups, Eye and Aiye confraternities, which worsen their rivalry.

Chairman, Aiyetoro Community Development Association, Mr Lukman Akande, told punch correspondent who visited the neighbourhhood on Tuesday that the thugs had become a huge burden to the community.

MUST READ:  JUST IN!! EFCC Returns $4, 040 To Brazilian Victim Of Internet Scam

He said the activities of the gangs festered because the police were initially indifferent to complaints lodged by residents. 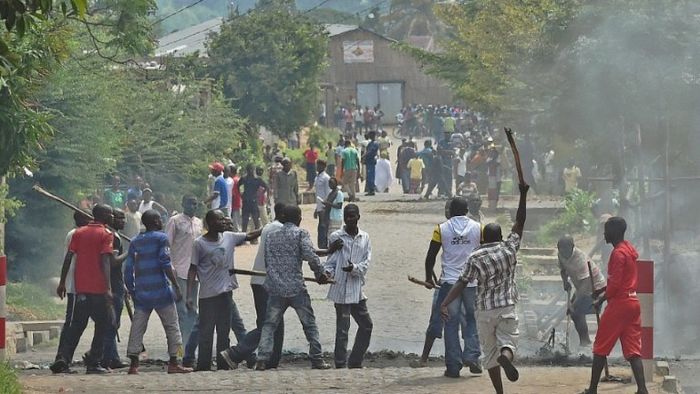 “The major challenge we are facing in Aiyetoro and Ajegunle at large are the hoodlums called Awalas. Before now, when we went to police stations to report them, some policemen would say they were not thieves.

“That was in 2018. They later graduated to notorious thieves. At times, when they were operating and we reported to the police, they would promise to come but we would not see them until the operation ended.

“On occasions when some of them were arrested, police would insist residents must write statement as witnesses but people were afraid to do so. Eventually, they would be freed and returned to the community.

“They usually operate in groups. They will waylay people on the road around 7pm and collect their phones and other valuables. If they ask for your phone and you don’t give them on time, they will attack you with cutlasses. Some of them carry guns.

“When they enter a street, everyone will start running helter-skelter. Immediately, they collect phones, they will check SIM cards for account numbers of the owners and hack into the accounts.”

MUST READ:  Chukwueze Can Become One Of The World Best Players – Ikechukwu Uche

JUST IN: Lockdown May Be Extended, Says Lagos Governor, Sanwo-Olu