An inspector of police identified as Stanley Azu serving under Azumini Police Division in Ukwa East LGA of Abia State has reportedly killed a petrol station staff in Obingwa LGA.

Inspector Stanley was said to have tried stopping a vehicle that violated the lockdown order but the driver defied the instruction.

Sources in the area said that the police inspector chased the driver and reportedly fired at him.

MUST READ:  Nigerian Youths Will Be Recruited To Fight Against Boko-Haram – Buratai Reveals

The bullet strayed and hit Chibuisi, who was in his business centre.

Chibuisi was said to have been pronounced dead at Abia State Teaching Hospital where he was rushed to for urgent medical attention.

Chibuisi until his death was a staff of Greenmac Energy Ltd, a Petroleum Station Company owned by his in-law.

Abia Police Commissioner, Ene Okon, confirmed the arrest of the officer and said that the State Criminal Investigation Department (SCID) has taken over the matter.

MUST READ:  Can You Say “You Dey Totori Me” In English? (Watch Funny Translation On The Street)

Okon said that the police as an institution does not take such action of the inspector lightly.

“That police inspector was arrested immediately and detained.

“As I’m talking to you, SCID has taken over the matter and are investigating the police inspector for murder.

“We have our rules of engagement, we have our standard of operation and procedure and we have our own Force Order 237 as reviewed.

“That order has to do with when a police officer has to use his firearm and it’ll be justified,” Okon said. 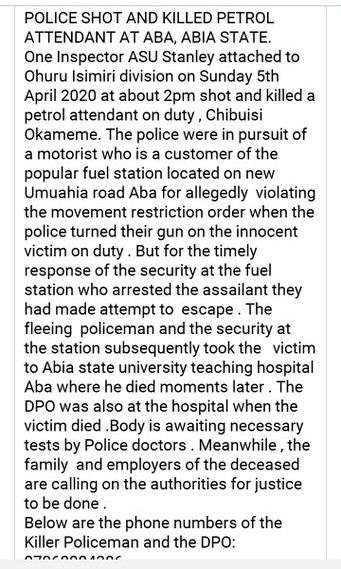 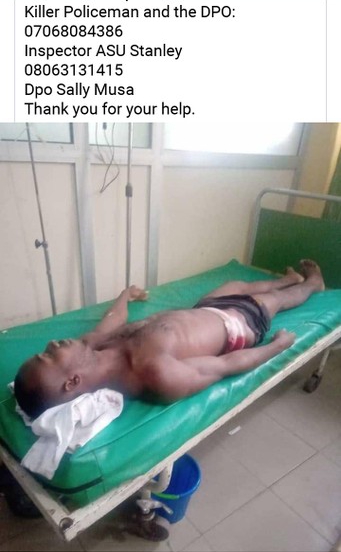 “Prince Is Still Doing This To Me” – Ozo Cries Out

“I Will Have A Mental Breakdown If Donald Trump Wins The Election” – Rapper, Cardi B Says

TRENDING!!! The Meaning And Ways Of Becoming A “Benefit Boys”