According to the vlogger and author, she was unaware that the man was married until she found a ring on him.

MUST READ:  THE TRUTH! Watford Coach Reveals Why They Beat Liverpool 3 – 0

Toke made this known while answering a question on when was the last time she flirted.

”Speaking of flirting, When was the last time you flirted with someone and who was it with?#tmbeauty”

”Oh just last night, turns out he is married, saw the ring and bounced”. 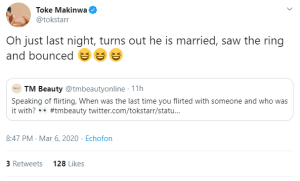 Check It Out! Berbatov Predicts Winner Of Tomorrow’s Manchester Derby