He is back at it again but this time, he is having a faceoff with his fellow South African Celebrity

South African Rappers, AKA and Cassper Nyovest are at each other throats over a motivational speech AKA posted on twitter.

MUST READ:  ‘Omashola And I Have Parted Ways’ – Kim Oprah Spills Tea In New Video

“If someone tries to give you advice, ask yourself. Does this person live in the house I want, drive the car I want, or generally live the life I want.

“If the answer is no, then ask yourself what qualifies this person to dispense ANY sort of advice to you in the first place.” 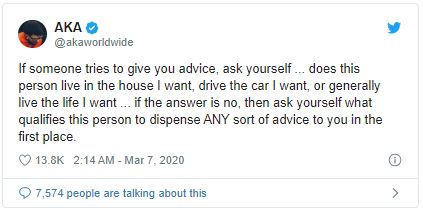 Cassper Nyovest who certainly didn’t agree with him replied back,

“You can get life-changing financial advice from a gardener who’s never owned a car or a house. Success or money doesn’t quantify wisdom.” 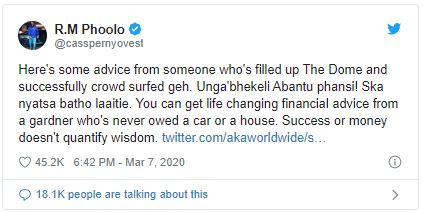 TEN NAIRA 2020:- Teni Gives A Hint On Getting Married To Naira Marley, As They Share A Kiss (Watch Video)