A social media user has called out popular crossdresser, Bobrisky over fake life she lives on Instagram.

Recall Bobrisky took to social media to claim she flew first class to Dubai, taunting many of her haters.

However, a web user has now called her out on her lie, saying she never flew first class but economy.

. Since your wack blogger can never fly first twice in a week. I’m Bobrisky d only rich babe. People hate since they aren’t living big like bob is living 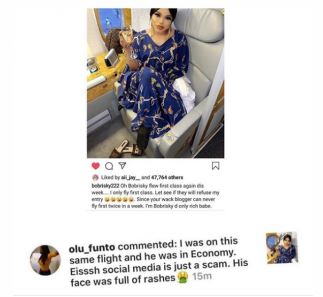 LET’S PLAY!! See This Game And Tell Us Which Month You Are Without Saying The Month (Mine Is Speechless)