Umar Ganduje, governor of Kano, has appointed three senior special assistants to handle issues on streetlights in the state.

In a letter dated February 13, the secretary to the state government notified Anwalu Salihu of his appointment as the senior special assistant, streetlights III.

According to the letter, the appointment was based on his ”dedication to duty, patriotic disposition and loyalty”.

“This is to formally convey to you that His Excellency, the Executive Governor of Kano State Dr. Abdullahi Umar Ganduje, OFR has approved your appointment as Senior Special Assistant, Street Lights III with effect from 10th February, 2020,” it read.

MUST READ:  Coronavirus: Why We Eased Lockdown – Nigerian Govt Reveals

“Your appointment into this position of trust and confidence was made upon careful assessment of your credentials, competence, track record of performance, dedication to duty, vast experience, patriotic disposition and expressed loyalty. It is hoped that you will employ these qualities to bear towards ensuring effective discharge of your assigned duties.

“As we move the state to Next Level of development, it is my sincere hope that you will live above board and justify the confidence reposed in you by the Government. I pray God in his infinite mercy accord you the wisdom and determination to execute the assignment diligently and to the expectation of the administration. Accept my congratulations, please.”

In a phone interview on Monday, Salihu Yakasai, the governor’s spokesman, confirmed the appointment, and said there were three senior special assistants on streetlights.

He told TheCable that the aides would report to the commissioner of works and infrastructure, and not directly to the governor.

Yakasai said the senior special assistants on streetlights will handle issues concerning generators and diesel used in powering the streetlights. 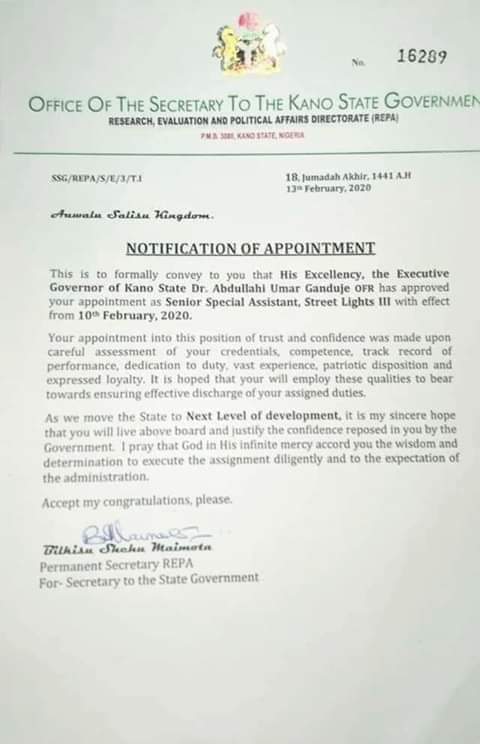 “The Kano metropolitan area is divided into clusters. Each cluster has different areas and their responsibility is to ensure that all the streetlights are functioning. We use generators to power the streetlights, so they ensure that there is constant supply of diesel.

MUST READ:  “I Knew Buhari Can’t Fix Any Of Nigeria’s Problems” – Elder Stateman

“It is just in partnership with the ministry of works. There are three special assistants on streetlights but they report to the commissioner of works and infrastructure.”

Why There Is Frequent Fire Outbreaks In Lagos – Lasema Reveals

ITS OVER!! Former Liverpool Striker Milan Baros To Retire