Ugberikoko road in Sapele, Delta state was thrown into mourning as a young girl identified as Angel Obas reportedly ended her life because her mum accused her of theft in the house.

According to Sapele Oghenek, the young girl then drank substance believe to be herbicide out of anger.

MUST READ:  Do You Agree?? Burna Boy Should Be Thanked For Bringing Respect To Nigeria Music – Uti Nwachukwu

She was then rushed to the Delta state university teaching hospital where she was pronounced dead.

Read the full story in pidgin: 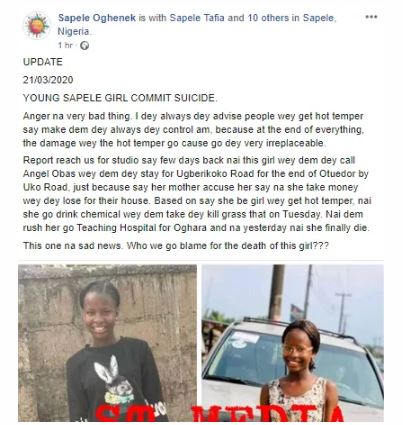