The reality TV star unveiled her via his Twitter page while partaking in a Twitter trend, adding that she is the “Love Of My Life” ahead of Valentine’s Day.

MUST READ:  BREAKING!! Arsenal Players Set To Be First To Agree To Pay Cut In The Premier League

Leo, who was at some point linked to his fellow housemate it Cee-C, shared a side by side photos of himself and his woman joining the Twitter trend ‘The face. The Val.’

A fan wasted no time in asking who the mystery lady was, Leo replied: ‘LOML’ (Love Of My Life) 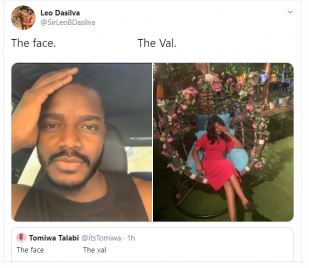 ‘I Want To Play With Ronaldo In The Future’- Rakitic

Your Ex-girlfriend Will Be Getting Married Tomorrow, Invited You To An Uncompleted Building For The Last S£x -WILL YOU GO?

BE SINCERE!! A Gun On Your Head By Arm Robbers, “Sleep With Your Blood Sister, Mother or Die” – WHAT WILL YOU DO?

BBNaija: Erica In The News Again For Not Wearing A Bra During Her Visit To Dele Momodu’s House (Video)

BBNaija: Dorathy Breaks Down In Tears Remembering The Horrible Life She Once Lived Before Entering The Lockdown House (Video)

Between Wizkid FC, Davido’s 30BG and Burna Boy’s Outsiders, Which One Is The Peaceful Fanbase?

[MUST READ] As Davido Is Being Praised Because Of Mayorkun And Peruzzi, He Should Be Blamed For This Also