Nollywood actor turned politician, Yul Edochie has warned men against marrying a career lady with the hope of keeping her at home.

According to him, women deserve to chase their dreams as well and also become successful.

Proferring a solution, Yul Edochie advised men who want a full housewife to go for the one who feels comfortable under such condition.

MUST READ:  Can 5G Spread Coronavirus? See What WHO Has To Say 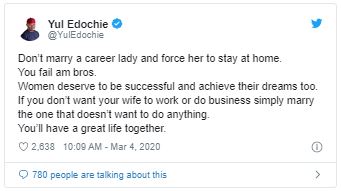 A Twitter user who reacted to his post revealed that it is dangerous to allow one’s wife to become a career lady.

See the exchange below:- 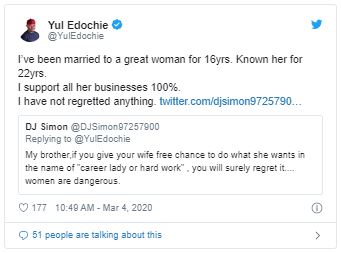 What Do You Feel About This?

MUST READ:  COVID-19: Easter Weekend Will Be The Hardest For Us – NCDC Boss

UFC 248:- Nigerian Isreal Adesanya vs Yoel Romero Set To Fight This Saturday – Who Do You Think Will Win?