Popular Nigerian rapper, Vector has shared his opinion on the idea that ‘the louder you say it, the better God hears’

According to the rapper, it is unchristian as he tagged people who believe such as selfish.

MUST READ:  “Why I Returned The N25Million A Man Invested In My Music Years Ago” – Waje Reveals (Video)

Vector also pointed out that people who shout the loudest expect God to hear them first, hence their actions make them selfish.

Sharing on Twitter, he wrote in part: “…If anything, it shows how selfish, cos the volume increase because the individual vuvuzela wants ‘God’ to answer him/her first…” 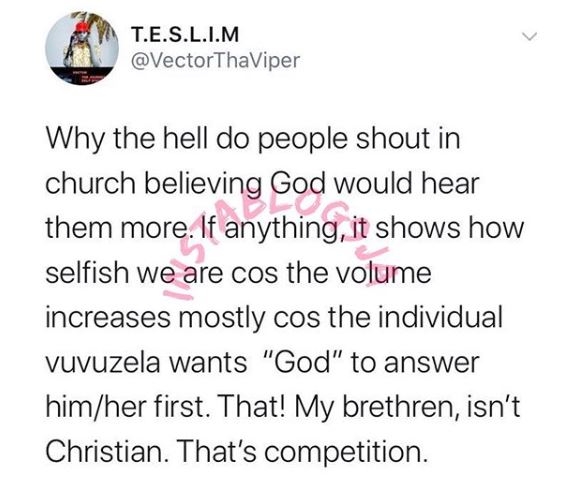 The post Do You Agree?? Shouting During Prayers Is Selfish – Rapper, Vector appeared first on Naijaloaded | Nigeria's Most Visited Music & Entertainment Website.

29 thoughts on “Do You Agree?? Shouting During Prayers Is Selfish – Rapper, Vector”

I Was Joking When I Said I Like 12, 13 And 14-year-old Girls – Nigerian Man Defends Himself After Outrage