A Ghanaian maid in Lebanon was found dead about 18 hours after she cried out for help, begging to go back home.

The 23-year-old Ghanaian maid, Faustina Tay, on the morning of March 13 sent a final desperate message for help to an activist group she had contacted about the abuse she was suffering at the hands of her Lebanese employers in Lebanon.

She sent, “God please help me,” but was found dead 18-hours later.

Tay’s body was discovered in a car park under her employers’ fourth-storey home in Beirut’s southern suburbs, between 3 and 4am on March 14.

MUST READ:  E-money: Investigate Poverty Too – Daddy Showkey Cries Out

A forensic doctor who examined her body found that her death was caused by a head injury “as a result of falling from a high place and crashing into a solid body”.

The doctor found “no marks of physical assault”. A search of Tay’s employers’ home found no signs of a struggle, and the death was being investigated as a suicide, according to a police report.

Her Lebanese employer, Hussein Dia, whose home Tay had lived and worked in for 10 months at the time of her death, told Al Jazeera he and his family were sleeping when she died. Adding that he had no idea why she took her own life as he never physically assaulted her – “I never laid a hand on her.”

MUST READ:  BBNaija: Laycon Recounts How Neo Boosted His Confidence And Changed His Life 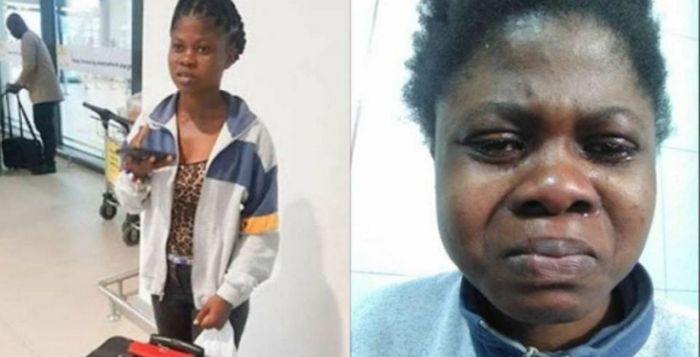 Meanwhile, Tay sent dozens of texts to her brother in Ghana, pleading for help in the week before her death. She also sent dozens of texts and more than 40 minutes of voice messages to Canada-based activist group, “This Is Lebanon”, providing detailed accounts of recurrent physical abuse.

Tay told the group that Dia and Ali Kamal, the owner of the domestic worker’s agency that had brought her to Lebanon, had each beaten her twice between January 16 and March 6.

Kamal had beaten her along with one of his employees, Hussein, she said.

MUST READ:  Top 5 Nigerian Artistes That Started Music From School (No.1 Will Shock You)

In the messages, Tay repeatedly expressed concerns that speaking about her ordeal could lead to more abuse, and the confiscation of her phone, which she said had taken place once before.

“I’m scared. I’m scared; they might kill me,” she said, in a chilling voice note to activists.