Cardi B wants everyone especially Africans to know that she is coming back to Africa.

The American rapper made this known via her Twiter page on Thursday, February 20, 2020, while responding to the sales of her concert tickets in South Africa.

“Cardi B fever has hit Mzansi – so much that it crashed a tickets website in seconds,”

MUST READ:  Olubadan Reacts To Claims Of Selling Chieftaincy Titles For N30m (See What He Said)

It didn’t take long before the music star responded to the tweet with her Nigerian given name, Chioma B; ”SOUTH AFRICA !! Chioma B is coming !!!!…. Teach me more bout your country in the comments 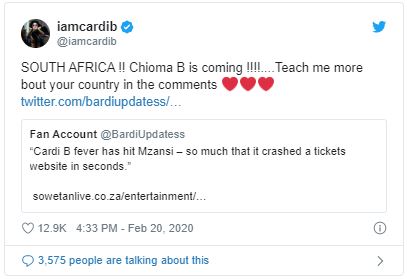 We hope she has fun the way she did during her visit to Nigeria in 2019. Cardi B was in Nigeria back in 2019 for the Livespot Concert.

MUST READ:  BE HONEST!! You’re Offered 100million Naira For Your Body To Be Tested With New Coronavirus Vaccine – Would You Accept It?

From the moment she arrived in the country, we all knew she was happy to be in Nigeria and she had a swell time.

One of the highlights of her visit to the country was the viral video of her demanding to eat Nigerian Jollof rice.

The post “Chioma B Is Coming To Africa Again” – Cardi B Reveals (Guess The Country She’s Going To) appeared first on Naijaloaded | Nigeria's Most Visited Music & Entertainment Website.

MUST READ:  YOU CAN LEAVE! Tottenham Allow Son & Bergwijn To Leave The United Kingdom

“Imo State Does Not Have Money” – Governor Uzodinma Cries Out

CURSED OR WHAT!!! German Mayor Deliberately Gets Infected With Coronavirus

BRAIN TEASER!! Who Can Solve This Simple Mathematics Question (90% Will Fail This)

Philippe Coutinho In A Shock Move To Chelsea (See Details)

Again! We Are Yet To See Naira Marley – Police

MAD OO!! This Freestyle About Coronavirus From Frankie Will Blow Your Mind (Watch Video)