This blogger had earlier gotten into a war of word with Yomi over claims that actress Lola Alao was maltreating the kids of late actress Aisha Abimbola.

MUST READ:  Price Of Crude Oil Is Rising Again As The World Eases COVID-19 Restrictions

“In my service year, I met a girl who said she acts. She mentioned Yomi tried to sleep with her but stories like this are so difficult to prove. It may also be in his past. He may be a better person. We all have to look at issues like this carefully. He who asserts must prove”.

See The Screenshot Below: 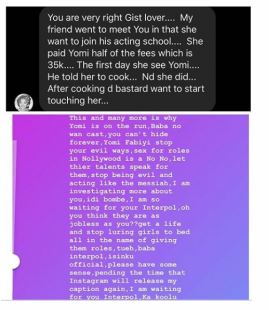