Burna Boy has unfollowed everyone on Instagram, except his London-based girlfriend Stefflon Don.

The Nigerian star has 5.1million followers on the platform and now just follows one person.

On Twitter, however, where he has 2.6million followers, he follows 1043 other people. Among the people he follows are star footballers such as Raheem Sterling, Eniola Aluko, Alexander Oxlade-Chamberlain and many institutions connected with his music career.

The star’s aloofness on Instagram came to light as faced a backlash over his comment about his place in Nigeria’s musical pecking order.

FACT! I always knew I was and I am THE BEST. Everyone you think is the best KNOWS I’m BEST since Fela Kuti. But @timayatimaya told me something a long time ago that made me not care about being the best. “The World can do without the Best” the world will still spin regardless”.

This has stirred controversy in Nigeria, with some critics slamming him for arrogance.

On Saturday, Burna Boy repeated his point in a series of tweets on 15 February, which he has now deleted.

“Remember I Told you I was the African Giant and most of you laughed and said I should be grateful for small fonts. I pray that you Learn from me, I mean this in no bragging way and the Wise know that the Future of Africa depends on the kind of strength and resilience i Show.

“You say “thank God he didn’t win”. Because I say the Truth? And because of your twisted Fake views on humility. Ive been out here With My Family since 2012 going through unspeakable things just to get here against ALL ODDS.

“I repeat. Nobody that is not Fela or My Family can EVER say they paved any way for me. Fuck you!”

See Photo of his page below: 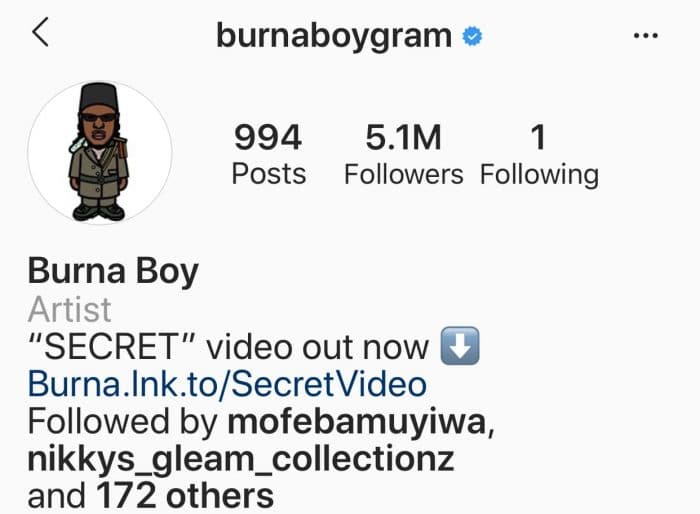 Multi-talented rapper & song writer, Didomz comes through with his first single of the year 2021 titled “The Game” . The Nolly Griffin produced...

TELL US YOUR VIEW!! Are You Open To Marrying From Another Tribe Or Race ?