Controversial male barbie, Idris Okuneye simply known and addressed as Bobrisky has warned that nobody should sneeze or cough around him following the coronavirus pandemic.

According to the crossdresser, anybody who does would get a hot slap from him.

The crossdresser made this known via a post he shared on his official Instagram page on Monday, 23rd March.

He made the comment only a few hours after the total confirmed case of the deadly disease rose to 36 in Nigeria.

“Don’t cough or sneeze around me pls. I take God beg you. If you do I will slap you.” 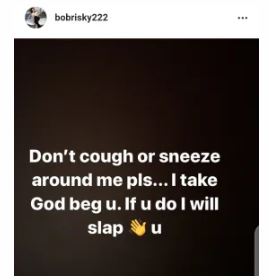 The post Bobrisky Reveals What He Will Do If Anyone Coughs Around Him appeared first on Naijaloaded | Nigeria's Most Visited Music & Entertainment Website.